Steve and John had been friends for a long time. They were the best of friends since the
fourth grade when Steve had helped John face down the school bully. They had played
high school basketball together, gone to college together, and had even proposed to their
future wives on the same night. Soon after, they went into the heating and air
conditioning business together – an “even Steven” partnership, they called it. Steve, as
president and COO, ran the crews and supervised the contractors while John, as CEO,
pounded the pavement for business and coordinated the jobs.

Over the years their business grew. Before long they had 12 crews dispatched every day.
John’s business acumen and sales skills had the company’s services in high demand, and
Steve’s people skills and work ethic kept customers loyal and crews productive. After 22
years, the business was worth 4 million dollars and generated revenues of over a million
dollars a year. Then Steve and his wife were killed in a car accident by a drunk driver.

John was crushed – in addition to losing his best friend, he had also lost a huge part of his
business and livelihood – the man who made things happen where the rubber met the
road. Sure, there were good men on the crews, and with some training, one of them
might be able to step up and shoulder some of the burden of being the big boss, but it
would take months – even years – to train a replacement.

John sat in his office, head buried in his hands. There was a knock at his door, and in
stepped what was to become his worst nightmare: Steve’s son Johnny. Johnny, John’s
own namesake, was a 20 year-old high-school dropout with a known drug problem and
expensive tastes. With a sinking sensation that bordered on nausea, John realized he was
looking at his new business partner. As 50% owner of their joint business, Steve’s entire
stake in their business now belonged to his only son – Johnny.

In the months that followed, Johnny did little to help the business other than demanding
50% of all revenues generated. Feeling he wasn't getting enough money, and with little understanding of economics, he soon inserted himself into every business decision, from hiring to firing to bidding for contracts.  Soon, loyal crews began departing to the competition. No-show rates of employees skyrocketed. The work that actually did get completed was rarely finished on time and
rarely passed inspection. Before long, the company was barely surviving – hanging on
by a thread as it fought tooth and nail for each piece of business it landed.

Why did this happen? Was it fate? Hardly. Steve and John had simply made the same
mistake that many business owners do – failing to realize their own vulnerability. With
simple planning, the destruction of the business could have been avoided. Granted,
nothing short of clairvoyance could have avoided Steve’s death in a car accident – but
some simple business succession planning would have gone a long way to keeping the
business strong and viable during the months following Steve’s death.

All closely held businesses should consider business succession planning. While there
are many solutions to a problem such as this, Steve and John would have been well
served to create a buy-sell agreement. This agreement, which is a legally enforceable
contract, would have given John the ability to buy out Steve’s stake in the business for a
predetermined amount should Steve die or become incapacitated, leaving Johnny with no
power to influence any business decisions whatsoever.

An additional benefit of this type of business succession planning is that the agreement
can be structured in such a way as to allow the owners – through the business – to stuff
the policies full of tax-deferred cash values. In the event that none of the partners die -
which is usually the case - they can use the cash-fat policies as retirement bonuses or to
provide supplemental income and tax-free death benefits to their families once they
ultimately enter retirement.

Given Steve’s role in the business, it would also have made sense for the business to own
a “key man” insurance policy on Steve’s life. In this case, had this protection been
available, John would have had enough money to immediately search for, and probably
recruit, an experienced foremen already performing Steve’s critical duties in another
company. While the insurance would not have mitigated John’s pain of losing his best
friend, it would have helped him replace Steve’s business skills in a relatively short
period of time. While the premiums for the insurance policy would not have been taxdeductible
to the business, the death benefit would have been received tax free by the
company.

As business owners, our businesses are often a large part of who we are. The sacrifices
every business owner makes to create and nurture a successful business are great – too
great to have the results of those sacrifices disappear in a moment by failure to plan.
Please consult with your financial planning professional on the steps necessary to protect
and preserve what may well be your biggest legacy – your business. 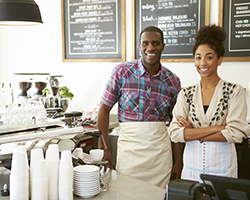