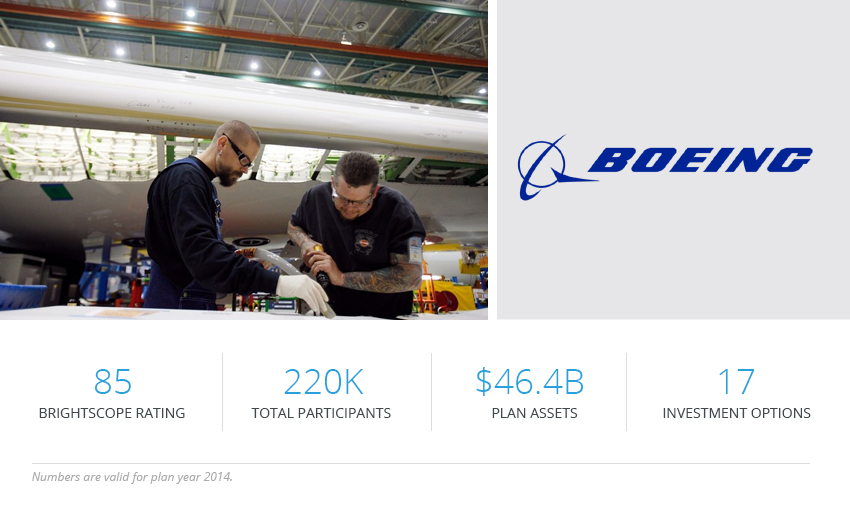 In most respects Boeing’s retirement offering is a great model of how to run a large retirement plan. Participants in Boeing’s 401(k) plan are beneficiaries of a participant-friendly design with immediate access, automatic enrollment, immediate vesting of company matching contributions, and a simple and diversified investment menu of low-cost collective investment funds. There are small areas for improvement such as decreasing participant exposure to company stock, but generally Boeing follows BrightScope’s model for an effective retirement plan.

This backdrop, however, did not prevent Boeing from settling its 2006 401k fee suit for $57 million. Much of the current investment design and approach to fees seen in the BrightScope data covers the time period from 2007-2014. This time period occurred after the original 401k fee suit and very well might reflect positive changes spurred in part by the suit itself.

Boeing is an international manufacturer of airplanes founded in Seattle, Washington. Although the company lists Chicago as its current headquarters, the majority of Boeing employees (over 80,000) work at the company’s Seattle location. Boeing is the second-largest defense contractor worldwide. The company’s retirement plans are administered by Scott Buchanan, Director of Benefits Delivery.

Boeing’s retirement offering includes 9 different defined benefit (DB) plans and a single defined contribution (DC) plan. Boeing will be freezing its DB plans by January 1, 2016, making its DC plan the centerpiece going forward. Since 2009, all non-union employees and new hires represented by 28 unions have been placed in the defined contribution plan. Boeing’s defined benefit plans will not be included in our analysis since they are not relevant for future Boeing employees.

Boeing has been in the news due to a recently settled nine-year-old class action lawsuit filed by current and former Boeing 401(k) plan participants. The lawsuit claimed Boeing did not fulfill its fiduciary duty of ensuring fees for administrative, recordkeeping, investment management and similar services are reasonable and not excessive and taken on solely for the benefit of participants. The plaintiffs in the case said the fees and expenses assessed to participant balances were “a consistent, albeit rarely discussed, force reducing 401(k) accounts’ earnings.” In early November 2015 Boeing settled the lawsuit for $57m, which will be distributed among people who participated in the plan from 2000 to 2006. Tony Parasida, Boeing’s Senior Vice President of Human Resources and Administration, was quoted about the settlement:

“[this is] not an admission of wrongdoing, and Boeing maintains that it has prudently managed and overseen the VIP or Voluntary Investment Plans at all times.”

Boeing’s settlement for $57m is on par with similar litigation against company retirement offerings. In 2014 Lockheed Martin settled a similar lawsuit for $62m.

Boeing’s BrightScope Rating has steadily increased since its 2011 rating of 80. The DC plan currently checks in at 85. Boeing’s current rating is well above its peer group average of 74 and just 3 points shy of the highest ranked plan in its peer group. The plan’s steady improvement can be attributed to increases in average salary deferrals and company generosity over the last 4 years. The plan’s 100% participation rate also helps Boeing’s BrightScope Rating.

Boeing’s high BrightScope rating is no surprise when considering its plan design. As mentioned previously, Boeing employees are immediately eligible to participate in the plan, automatically enrolled upon hire, and the company’s matching contributions are immediately vested.

BrightScope applauds each element of Boeing’s plan design. Allowing participants to immediately participate in the plan allows for early retirement savings. Automatically enrolling employees starts their retirement savings without any work required from the participant, a huge plus in BrightScope’s opinion. Matching contributions give participants incentive to save more and immediate vesting allows employees to keep their company contributions regardless of their time spent with the company.

Boeing's DC plan receives top marks across the board when compared to both plans at similar companies and plans across the entire 401(k) universe. BrightScope recommends other companies use Boeing’s plan as a template.

Boeing’s investment menu is largely made up of collective trusts, but does include Boeing Company stock and a pool of non-company common stock. The plan’s largest fund is the SSgA S&P 500 Index, which makes up 20% of all assets (or $9.3b). Index funds have been on the rise within Boeing’s DC plan, climbing from 33% of total assets in 2010 to 42% in 2014. The shift towards more indexed options fits the trend seen throughout the 401(k) universe. Their low-cost and reduced risk of underperformance make index funds a popular choice for plan administrators. It wouldn’t be surprising if Boeing participants continued to increase their allocations to index funds over time.

Boeing offers 17 investment options, its lowest count since 2010. BrightScope likes to see lower investment options because it means things are kept simple for the participant. The menu is also fairly well diversified with funds in 5 of the 8 main BrightScope categories. Additionally, Boeing offers a custom target date series spanning target years from 2020 to 2055 and a retirement income fund.

One aspect of Boeing’s plan which could be improved upon is the amount of company stock that participants are invested in. Currently, Boeing company stock makes up 13% of the plan’s net assets. This is a few percentage points above the 10% threshold BrightScope suggests for company stock holdings in a 401(k) plan. Boeing should seek to ensure that not only is the plan as a whole under 10% but also that each employee of the plan has an exposure to the company stock that is equal to their risk tolerance (not exceeding 10%). Doing so would reduce the risk of losing retirement savings in the event of a company downturn.

Boeing frequently adjusts their investment menu, making two or more changes each year since 2010. The frequent changes they make are indicative of an active investment committee that is looking for the best options for participants. Boeing has been searching for an alternative fund that suits its participants over the last five years, utilizing three different alternative funds since 2010. Bond funds are another focus of the Boeing investment decision team. Four of the last five years have seen an addition or subtraction of a bond fund on Boeing’s investment menu. Boeing added 4 different bond funds in 2010, making it the most active on the bond funds front.

Boeing is a top-tier retirement plan that other companies should model. The company allows for immediate and automatic participation in the plan, matches employee contributions, and vests those contributions immediately. A simple, diverse, low-cost investment menu makes investing in the plan easy for participants. Boeing ranks near the top of its peer group and with a few small changes could move close to the top spot. The black eye from the 401(k) fee class action lawsuit should not take away from the credit the Boeing 401k committee deserves for its DC plan design decisions.

do you need a genuine loan for business purposes or to pay your debt contact Mr Kellie Wilson now for genuine loans via email: Oceanicfinance113@gmail.com